One Small Step for Man, One Giant Leap for Petrochemicals

Preface: So, I was asked if we can somehow tie Moon Day with petrochemicals. I said that I’m pretty sure space suits are made from synthetic materials, so that’s a pretty good tie-in. Well, it turns out that the space suit worn by Neil Armstrong had 21 layers of synthetic materials…21 layers! So, after a bit of research, here it is:

It was rare that a kid nine years old was allowed to stay up past 10:00 pm in the Cooper household, even during the summer. On July 20, 1969, however, Mrs. Cooper made an exception. Just before 11:00 pm, astronaut Neil Armstrong exited the Apollo 11 lunar module and took his first step on the Moon. What a time for America. What a time for a kid with an inquiring and impressionable mind.

Now 50 years later I get to look back and say with pride, “That would never have been possible without petrochemicals.” Many folks may think that I’m referring to rocket fuel, but I’m not. Yes, our member companies did make the kerosene that was used as rocket fuel, but I’m talking about the building blocks that made the advanced materials for space suits possible. Without those materials, a human could not have survived the harsh environment of space, including the surface of the moon.

The very first “space” suits were somewhat primitive and not much more than the fancy suits worn by the original experimental pilots who were consistently breaking altitude records for flight during the late 50s and early 60s. To achieve orbit around the Earth and actually step outside into space required a series of protective layers that weren’t necessary for the early pioneers who stayed in the aircraft.

Space is pretty much a vacuum, so there is no consistent pressure in space. Breathable oxygen is not available without consistent pressure. People take for granted, but tend to forget that we expel carbon dioxide when we breathe and, somehow, that carbon dioxide has to be removed from a space suit. In Earth orbit, the temperature can get as cold as -250º F and, in the sunlight, as hot as 250º F. There is also the issue of radiation from the sun. There is no protective ozone layer to absorb ultraviolet waves, nor is there protection from other types of radiation. Another potential danger is micrometeoroids, which are tiny solid particles that can hurl through a vacuum at high speed. Space suits were designed to account for these very harsh conditions.

The space suit worn by Neil Armstrong was a multi-layered, modern marvel. It was composed of 21 different layers of synthetic materials, most of which used petrochemicals as the primary building blocks for their manufacture. The outermost two layers used Teflon® for abrasion resistance and fire protection. Teflon® is a brand name for polytetrafluoroethylene (PTFE) and is made from chloroform, which is derived from methane. While AFPM doesn’t officially include methane derivatives in its portfolio of petrochemical products, many other industry analysts do, so I’ll include it too. The next two layers provide reflective insulation, which is a fancy way to say it protects from harmful radiation, and are made from aluminized Kapton®, which is a polyimide film infused with aluminum. The petrochemical building blocks benzene and mixed xylenes were used to make the polyimide film. After that, there are another two layers made from a laminate of Teflon®-coated silica fiber and Kapton®, which serve as a spacer between the reflective insulation layers. Making up the other multilayered reflective insulation is aluminized Mylar®. Mylar®, the same material balloons are made from, is a special type of polyester that uses ethylene and para-xylene as building blocks.

After the outer layers, which are designed for protection from exterior dangers, there is a four-layered spacer made from nonwoven Dacron® polyester. This type of polyester is made from the same building blocks as Mylar®, but this polyester spacer is not aluminized like the Mylar® layers. Now let’s turn to the inner layers.

The next layer serves as an inner liner and is made from neoprene-coated nylon. Neoprene is a synthetic rubber made from butadiene, another essential petrochemical building block. Nylon also uses butadiene as a building block, in addition to benzene. The next layer is uncoated nylon and serves as a restraint for the pressurized bladder, an impermeable layer that holds in pressurized oxygen. The bladder layer is also a neoprene-coated nylon. To make the suit more mobile, the flexible joints use a neoprene convolute, which is an accordion-like structure reinforced with nylon tricot that allows for mobility, yet holds in the pressurized oxygen. For abrasion protection, the next layer is a knit jersey laminate, usually a polyester that is laminated with polyurethane. Polyurethane is made using benzene or toluene, as well as ethylene and para-xylene. The innermost layer is a lightweight cloth made from Nomex®, which provides comfort and additional fire resistance.

With 21 layers it seems that a space suit would be hot to wear and not a pleasant environment. For comfort purposes a liquid cooling garment was constructed to be worn inside the space suit. The garment is made out of Spandex, a high-tech type of nylon, and uses vinyl tubing made out of polyvinylchloride (PVC). PVC uses ethene is the primary building block. For comfort, the garment also has a layer of porous lightweight nylon.

A spacesuit would not be complete without some kind of protection for the head. The space helmets used by the Apollo crew are made from polycarbonate, which is a high-tech plastic used in bullet-proof glass. The visors are also made from a specific polycarbonate that goes by the trade name of Lexan®. Polycarbonate is made using phenol and acetone, which are derived simultaneously in a process that uses benzene and propylene as the petrochemical building blocks.

As you can see, the Apollo space suits were constructed to very exacting requirements. Modern space suits still use many of these materials, in addition to more advanced materials like Kevlar® and Gore-Tex®, both of which are made from petrochemical derivatives. Kevlar is an aramid fiber that uses benzene and para-xylene as building blocks, and Gore-Tex® is made from the same material as Teflon®, except it is stretched in a high-tech process and imparts very specific properties, including breathability. As you may recall, the chemical name for the material is polytetrafluoroethylene, which is made using chloroform.

To fully appreciate these modern marvels, I highly recommend a trip to the Smithsonian Institution’s National Air and Space Museum in Washington, DC. There you can see the entire evolution of space suits and get up close and personal to the actual suits worn by the astronauts. And it’s free!

*This post was originally published on July 19, 2017 on the AFPM blog. 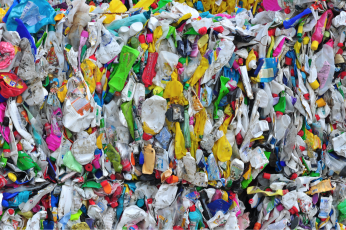