As the political debate about the U.S.- Mexico border is heating up the campaign trail, there’s another border debate brewing around energy policy. Mexico’s historic energy reforms are venturing into new phases this year, particularly in relation to the downstream segment of the oil industry (refining, marketing, distribution and retail). Successful modernization of the Mexican downstream energy sector can help enhance energy security and economic development throughout all of North America. The U.S. and Mexico Have a Thriving Energy Partnership The U.S. and Mexico have long been strong partners in energy.

Mexico is a very large export market for U.S. refiners. From January through May, U.S. fuel manufacturers sent 755,000 barrels per day of petroleum products into Mexico. Most of that volume was liquefied petroleum gas (LPG), diesel and heating oil, and gasoline (see below). 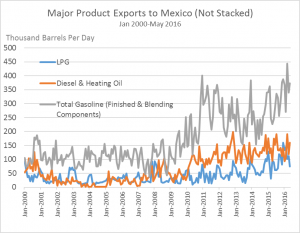 Additionally, U.S. refiners are large consumers of Mexican oil. Mexico exported an average of 590,000 barrels per day of crude to the U.S. over the first five months of 2016. In 2015, Mexico was the fourth-largest foreign supplier of crude to U.S. refiners. Background on Mexican Energy Reform Through a Constitutional Amendment in 2013 and supplemental implementing laws in 2014, Mexico opened up its energy sector to private investment for the first time since the 1930s. Under the framework of the new laws, Mexico will still own its hydrocarbon resources. Additionally, the state-owned oil company, Pemex, will maintain ownership of its assets and infrastructure. However, Pemex will now face competition from private investors, which could dramatically improve the operations of a Mexican oil and gas sector that has struggled with poor financial performance and decreasing production prior to the collapse in global oil prices. Much of the discussion around Mexico’s energy modernization has focused on upstream oil production.

Despite weak global oil prices, there has been some positive news on this front. The Mexican Government moved forward with three rounds of oil and gas lease auctions last year. After a slow start, the third round was successful, with all 25 leases available for auction being awarded to bidders at generous royalty rates. While most of the focus has been on the upstream elements of Mexican reform, in April, the country started the first phase of opening its downstream modernizations, nearly a year earlier than originally planned. Private companies are now allowed to import transportation fuel into the country and set up retail fueling stations. These reforms present challenges and opportunities for energy cooperation between the U.S. and Mexico.

The Challenges The first challenge lies in the fact that the retail fuel market in Mexico is uncharted territory. Consumer fuel prices have historically been fixed, to the point where many gasoline stations do not even have signs indicating the price. Under the law, price controls will remain until January 2018, when they will be allowed to fluctuate with the market. Without market price signals to indicate where consumers need fuel, it is more difficult to identify new opportunities for marketers to sell gasoline. While the price limits only establish the maximum amount that can be charged, meaning private businesses could still try to compete on a price basis under this ceiling, firms looking to sell into this recently opened market could struggle to compete with Pemex. The Mexican state-owned oil company will remain the largest player in the retail market for some time. The absence of a completely free market will certainly create challenges for new entrants.

The second challenge is on the refining side. Mexico’s refineries are extremely inefficient, hampered by decades of underinvestment. Some estimates indicate they lose as much as $5.3 billion annually and much of the refining capacity is not equipped to process Mexico’s own, heavy crude oil. It will take significant investment for Mexican refineries to become competitive in a more open market. Additionally, in the current marketplace, there is significant excess refining capacity globally. With U.S. refiners facing tough economic headwinds in such an environment, American companies may have little interest to invest in competing refineries in their primary export market.

Finally, concerns over transparency and security remain. Pemex still owns and controls fuel transportation and infrastructure, and while the law requires the company to open these venues to competitors, transparency on permits, processes and procedures for gaining access will be critical to ensuring a truly open market. Security risks also persist in parts of Mexico. As of last year, fuel theft and diversion was a significant issue facing Pemex, which experienced over one thousand instances of illegal pipeline access in only the first quarter of 2015. Part 2 discusses the opportunities, the current state of play, and why it matters for the U.S.A. The blog post can also be found in full on Medium. 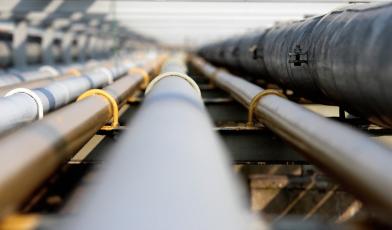 The United States is the now largest producer of crude oil and has the largest, most complex and most efficient refining industry in the world. Yet two of our most important oil trading partners are those that share our borders: Canada and Mexico.
Read More
Blog
Back to Top