As we head into the Memorial Day weekend, a lot of attention is being paid to the price of gasoline. This is no surprise since over 36 million travelers are expected to hit the roads across the country this weekend - at a time when prices for the crude oil used to make fuels are climbing. While the price of summer gasoline is typically higher than winter gasoline because of federal and state gasoline requirements, according to the Energy Information Administration (EIA), the price of regular gasoline averaged $2.92 per gallon nationally on May 21, 2018, which is up by 52 cents per gallon from last year’s price of $2.40 per gallon. As this weekend marks the official beginning of summer in the United States, know that factors that impact the price you pay at the pump go well beyond our borders. First, the increase in the price of gasoline is directly tied to the increase in the price of crude oil, which is set in the world market, not by the refineries that produce the gasoline. The price of Brent crude oil has increased by 61 cents per gallon since May 2017 – which is more than the increase in gasoline price; and the price of WTI crude oil has increased by 53.5 cents per gallon in that same time period. And, as the price of crude increases, our U.S. refineries – which are among the most efficient, sophisticated and cost-effective in the world – pay more for the crude they refine into gasoline, diesel, and other fuels. The increase in the price of crude oil is due to a host of factors, including reduced production from Venezuela and concerns about exports from Iran. Additionally, there is declining production from mature fields in Norway, Brazil and Angola, and a lack of investment to replace crude oil lost from those fields. Add to those factors that global demand for refined products has been increasing. Finally, the realization that continued increases in U.S. shale production, which have helped to keep global crude oil prices lower, will be challenged by pipeline capacity constraints. So, as you fill your tanks this weekend, keep in mind that there are many factors that influence the price you pay. 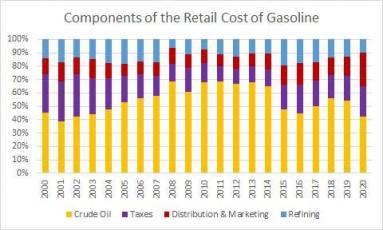 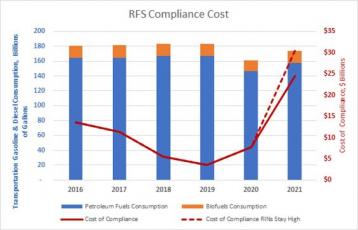 The Renewable Fuel Standard is more expensive in 2021 than at any other point in the program’s 15-year history. Soaring RFS prices signal that the RIN bank could run dry.
Read More
Blog 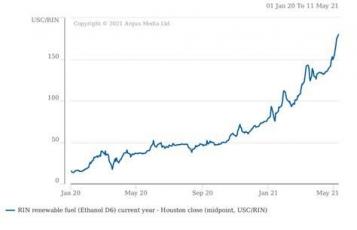 The cost of Renewable Fuel Standard (RFS) compliance credits, specifically D6 renewable identification numbers (RINs), is out of control. Sales of D6 RINs for conventional ethanol recently registered above $1.90 (the highest trades in history).
Read More
Blog
Back to Top